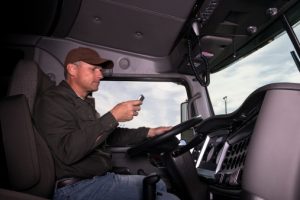 The National Transportation Safety Board is urging changes to the rules regulating commercial truck drivers. According to Fleet Owner, the NTSB believes commercial drivers should be prohibited from using all electronic devices, including hands-free devices, when operating a commercial motor vehicle.

A truck accident lawyer knows a driver who is using an electronic device is using up his brain energy. He's focused more on the device and less on the road.

The risk of a collision is significantly increased any time a motorist is distracted. Because truck accidents involving commercial vehicles can be so deadly for motorists, every possible precaution needs to be taken to prevent these types of incidents. This may mean adopting the NTSB recommendation and imposing stricter limits on what truckers can do as they drive.

Truckers May be Distracted By Hands-Free Devices

The Federal Motor Carrier Safety Administration rules currently ban truck drivers from using handheld cell phones and other handheld electronic devices. The ban is in place because the odds of a trucker becoming involved in a safety-critical event are six times greater if the commercial driver is using a mobile phone. A safety-critical event is classified as a crash, a near-collision or a trucker unintentionally veering out of his lane.

The FMCSA reports a trucker who dials a cell phone while driving will take his eyes off of the road for an average of 3.8 seconds, during which time he could drive 306 feet without his eyes on the road if he is going 55 miles-per-hour. Obviously, this is too dangerous a risk to accept, and this is why handheld phone use is banned.

The NTSB, however, believes that this is not enough. Fleet Owner quoted the acting chairman of the NTSB as saying allowance of hands-free devices "misleads people to believe that 'hands-free' is as safe as not using a phone at all." In reality, studies have shown using a hands-free device is at least as distracting as using a handheld device. In some cases, research has shown hands-free electronics are actually more of a distraction than those  held in the hand.

The NTSB's concerns were given more credence in light of a newly-released FMCSA report about the cause of a truck-train crash that happened last May. The collision involved a trucker who was allegedly focused on an electronic device and did not check to make sure the railroad tracks were clear. The trucker entered the tracks, causing a 15-car freight train to derail. The freight train subsequently exploded because of the derailment.

The incident shows the devastation that can occur as a result of a simple mistake made by a distracted trucker. FMCSA regulators should consider doing what the NTSB suggests and banning the use of hands-free as well as handheld devices.

Until the FMCSA acts, truckers need to remember that it is their responsibility to avoid distractions that cause their driving to become unsafe.