Home » Blog » Sharing the Road with Motorcycles in Ohio

Sharing the Road with Motorcycles in Ohio 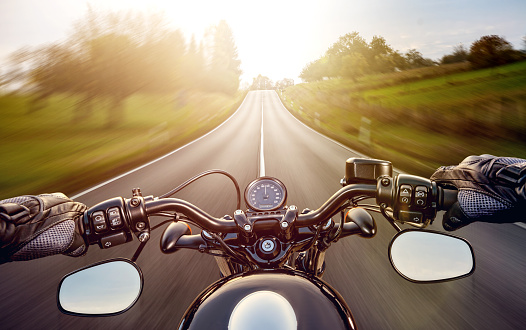 It’s riding season in Ohio, which unfortunately means it's also the season for bikers to suffer serious and sometimes fatal injuries in motorcycle accidents caused by others.

Just last month, a 25-year-old motorcyclist died and his passenger was critically injured when the driver of a Nissan Pathfinder attempted to pass a tractor-trailer and collided with the victims' oncoming motorcycle. According to a report by WBNS, the deadly crash resulted in the 47th motor vehicle fatality in Columbus for 2021.

Unfortunately, this is one of the most common causes of motorcycle accidents: a driver in an enclosed vehicle fails to yield or travels into the path of an approaching motorcyclist, and the rider is seriously injured or killed in a collision as a result.

While failure to grant the right of way is one form of negligence that can lead to a serious motorcycle wreck, there are, of course, many other ways a motorist can contribute to a bad accident with a biker.

Here’s what drivers in Ohio need to know to keep motorcyclists safe this summer.

Respect a motorcyclist's right to the road

In Ohio, a motorcycle has just as much a right to the road as any other motor vehicle. Just because motorcycles are smaller and take up less of the road than a car, truck or SUV doesn't mean there are different rules that apply to them with regard to yielding the right of way.

“We can talk about statistics all day long, but each represents a loved one who didn’t come home, and for us troopers, that’s personal,” Sgt. Nathan Dennis, a spokesman for the Ohio State Highway Patrol, told The Dispatch. “What we want to do is ensure that everyone makes it to their destination safely.”

Far too often, the explanation a motorist gives for causing a severe motorcycle accident is, "I didn't see them." This is hardly an acceptable excuse for injuring a rider, as every motorist has a legal responsibility to make sure it's safe before turning, changing lanes, merging, passing, or proceeding through an intersection.

With that in mind, being on the lookout for motorcycles—especially when changing lanes and making turns—is one of the most important things drivers can do to keep riders safe. As such, always be sure to double- and triple-check your blind spots for motorcyclists.

Here are some other tips you can follow to help prevent a motorcycle accident.

Aggressive driving (e.g., speeding, tailgating, running a red light, brake checking), fatigued driving, and driving under the influence of alcohol or drugs can easily give rise to a severe or fatal motorcycle accident. Distracted driving, including texting while driving, is also something that is extraordinarily dangerous and puts bikers (and everyone else on the road) at risk.

Look twice for motorcycles to save a life

It's really tough to gauge how fast a motorcycle is going, so you should always assume it's closer to you than it looks. Due to their size, motorcycles can look like they're farther away than they actually are, which means you need to be extra careful when turning at an intersection and pulling into or out of a driveway. Again, failure to yield is one of the leading causes of motorcycle accidents across the United States.

Keep a safe distance when following a motorcyclist

The ability to stop on a dime is one of the biggest differences between riding a motorcycle and driving a passenger vehicle, so you need to ensure that you give motorcyclists enough room when following them from behind. It's common for bikers to reduce their speed by rolling off the throttle or downshifting, which means the bike's brake lights won't be activated to provide a visual warning that the rider is slowing down or coming to a stop. Experts say to keep 4 to 5 seconds apart when trailing a motorcycle so that you give yourself enough room to brake safely.

Always use your turn signals

This poor driving habit doesn't garner a lot of attention, but that doesn't make it any less dangerous. Activating your turn signals isn't just a courtesy, it's a way to communicate what you're doing to other road users—including motorcyclists—so they can adjust their driving accordingly.

Even if you do everything you're supposed to do as a rider and wear protective gear, your safety largely depends on the actions of other motorists who are driving much larger and more dangerous vehicles. While that can be a scary thing to think about, it's important to remember that injured riders have rights, and an experienced motorcycle accident lawyer can protect those rights while holding the negligent driver accountable.

If you've been injured or a loved one died in a motorcycle crash in Columbus or anywhere in Ohio, our law firm can fight for the full amount of compensation available to you under the law. Don't let an insurance company force a "low-ball" settlement offer on you that doesn't even come close to covering all your losses. Once you sign the paperwork and accept a settlement, there's no going back for more money—even if your accident-related expenses end up costing more down the road.

After a motorcycle accident, you can learn your legal rights and options by contacting us for a free consultation. There's no upfront money to hire us, and you pay no fees unless we secure financial compensation on your behalf. Get in touch with us today to find out more.