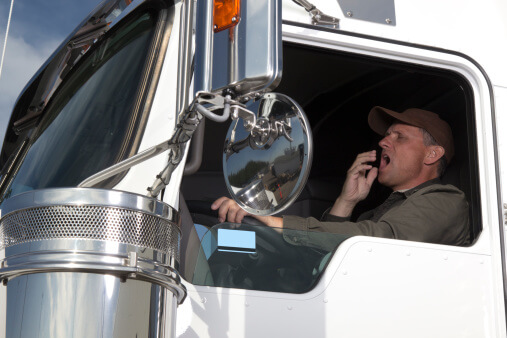 Sleep apnea is a serious sleep disorder that involves interrupted breathing and abnormally loud snoring. People with sleep apnea may experience headaches and excessive daytime drowsiness. The most common risk factors for sleep apnea include being overweight, smoking cigarettes, having a neck size greater than 17 inches and being over the age of 40.

There are three main types of sleep apnea, according to Mayo Clinic. Obstructive sleep apnea (OSA) is the most common form. An over-relaxed throat and mouth palate collapses and obstructs the airways to the lungs. For some people with OSA, the airways become blocked completely.

Unlike OSA, central sleep apnea (CSA) isn't a mechanical obstruction. Rather, the brain fails to signal the respiratory system to breathe. A person with CSA may periodically stop breathing and wake up. Complex sleep apnea syndrome is a combination of both OSA and CSA.

How prevalent is sleep apnea among truck drivers?

While only four percent of the population is impacted by this condition, as much as 35 percent of truck drivers have sleep apnea, according to Freight Waves. Truck drivers with sleep apnea often only receive small bouts of sleep each night. They never actually receive deep sleep (which is critical for physical rest) or dream sleep (critical for mental, cognitive, and emotional rest).

Truck drivers with sleep apnea are 250 percent more likely to be involved in a collision than those without it. They often experience poor memory, poor concentration, and irritability. It can also lead to a medical event (heart attack or stroke) while driving.

According to the Federal Motor Carrier Safety Administration (FMCSA), sleep apnea affects drivers' daytime alertness and performance. While drivers may not fall asleep behind the wheel, they may be less attentive and slow to react to collision risks.

Should truck drivers with this condition drive?

There are currently no sleep apnea testing requirements for truck drivers. The Department of Transportation does require physicians to measure the body mass index (BMI) of truck drivers. If a truck driver's BMI is 30 or greater, a sleep disorder test may be needed.

If you were hurt in a truck crash with a drowsy driver, it's critical that you speak to an attorney who will aggressively pursue your case. Smith Law Office in Columbus, Ohio has more than 40 years of combined experience investigating drowsy truck drivers. Our attorneys know how to take on trucking companies and their insurers. Contact us online today find out how we can help maximize your compensation.