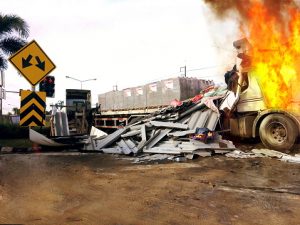 Fatal truck crashes may be on the decline due to emerging safety technology and stricter federal guidelines, but the number of deadly crashes involving large trucks is still significantly high.

In 2017, there were approximately 4,889 deaths across the United States caused by truck crashes, according to the Federal Motor Carrier Safety Administration (FMCSA). Roughly 82 percent of those killed in truck crashes were not truck occupants and included passenger car drivers, motorcyclists, bicyclists, and pedestrians.

Once incident illustrates why the death toll is so high

Despite federal and state agencies cracking down on truck drivers and companies who fail to comply with safety standards, many violators continue to go under the radar until it’s too late.

One recent fiery crash that killed multiple drivers in Colorado illustrates just how serious the problem is. The crash occurred at high speed after the trucker said his brakes failed. The driver said that he attempted to evade a crash by swerving into the breakdown lane. After discovering another truck parked on the side of the road, he swerved back onto the road and collided with several cars.

Video footage captured just moments before the crash showed the truck beginning to careen out of control while traveling down a mountain grade.

According to an article in Trucking Info, the Houston trucking company that the driver worked for incurred 30 violations since 2017, ten of which were brake-related. The brake citations include:

In addition to the brake-related citations, the company was also cited for:

Crashes like this are nearly impossible to predict for many drivers. Once a large truck begins to lose control, anything can happen, and the resulting crash can often be catastrophic.

Locally, one fatal crash involving a semi truck recently killed one person and sent two others to the hospital with serious injuries, reported FOX28. The crash occurred on Interstate 270 in South Columbus when a truck swerved and struck another truck. That crash lead to a highway pileup that involved several other vehicles.

Columbus attorney fighting for the rights of the injured

Smith Law Office is no stranger to serious and fatal truck crashes. Our attorneys have more than 40 years of combined experience pursuing justice for those injured or killed in truck crashes. Crashes like this are often tragic. The aftermath, often complex and frustrating for those involved. The last thing you need to deal after sustaining a serious injury or losing a loved one is a trucking company or insurance provider that is difficult to deal with. Let our attorneys do the work for you. We operate on a contingency fee basis, meaning you don’t pay unless you win. Contact us today to learn more.