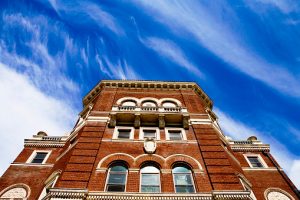 In 2018, allegations of sexual abuse began coming out against Dr. Richard Strauss, a physician who worked for Ohio State University’s (OSU) Athletic Department and Student Health Services and who died by suicide in 2005.

According to CNN, Strauss had a history of sexual assault dating as far back as the 1970s. OSU personnel were reportedly aware of the complaints, but failed to look into the allegations.

A report compiled by independent investigators and released by OSU, alleges that between 1978-1998, sexual abuse acts were committed by Strauss against at least 177 students during physical examinations. Incidents of abuse involved male students and were reportedly carried out at the university student health center and his off-campus clinic.

This information was compiled through interviews with hundreds of former OSU students and university personnel. While some of Strauss’s abuse was deemed “obvious,” much of it was committed under the guise of performing medical procedures.

According to the investigation, Strauss’s behavior included “unwanted oral sex,” and “excessive groping or fondling, often without gloves.” In addition, Strauss also reportedly committed inappropriate acts in locker rooms and at his home, including asking students questions about their sex lives.

Many of the students described Strauss’s examinations as “hazing,” and an “open secret” that more than 20 university employees – including coaches, trainers, and other team doctors – were aware of, but did nothing about.

OSU president Michael Drake called the inaction of OSU personnel a “fundamental failure” after the release of the report.

Abuse that went under the radar

According to OSU employment records, Strauss’s behavior went completely under the radar, despite complaints dating back to 1979. His actions never resulted in discipline from the State Medical Board of Ohio, despite there being an undisclosed report against Strauss by OSU. In addition, Strauss reportedly worked at five other schools before being employed at OSU, but there is no record of any allegations brought against him during that time.

Attorney Scott Smith had a chance to speak to CNN regarding the report. He called the report “more damning than we suspected. It reveals not only a cover-up, but a nurturing of sexual abuse systemically created by Dr. Strauss during his 20 years at OSU. Ohio State's actions are indefensible, appalling and unforgivable."

If you have been affected by the alleged abuse at Ohio State, please call us at 614-846-1700 or  888-311-LAWS (5297) to speak with attorney Scott Elliot Smith, or fill out the contact form on this page. Your initial consultation is free and all communication with our firm is strictly confidential.

More on the case is available here.